This article is dedicated to the victims of the Archdiocese of Newark. While the archdiocese has created many parishes and churches, there were some subjects that were taught by catholic priests. Among them were two notorious priests by the names of: Peter Cheplic, and Rev. Frank Rose.

The two priests have been known to have taken advantage of teenage boys in the 1970's, 1980's and possibly 1990's. Peter A. Cheplic was charged on about 8 charges (search on the internet) connected to abuses. While Rev. Frank Rose (who happens to be preaching somewhere in New Jersey) was never legally escalated to court and thus got away years before the shutting down of Saint Joseph of the palisades high school, new jersey.

This information has been gathered over the years, to demonstrate that even in catholic education, things can be twisted, corrupt, hypocritical, while also pretending to be self righteous...until they're caught. I would have preferred to be given a refund because the catholic education I was forced to enroll gave me negative results and at least others spoke out against the abuses that happened.

Saint joseph of the palisades high shool, west new york - new jersey. It was a once progressive high school that managed 3 floors as a high school. Later on, something went wrong in the late 80's and the population started to drop. At some point the first floor became a grammar school and the third floor became the remaining of the high school population until its closing in 2009.

While St joes had a "good reputation before the online media started to exist in the early 2000's, it was tough and hard to get actual reviews on the school. The "word of mouth claims" were either biased by saying it was a "good catholic school" to "a ridiculous waste of money, you're better off in public high school." Some students wanted to be in public high school but remained against their will...and were exposed to a travesty of rejected students from other schools who were transferred and to unqualified teachers, such as an actor teaching science, and an ex store manager who had no clue what to teach in art class.

Personally, the Saint joes of the palisades education was not worth the money. During my time there, I met a lot of hostility and cliques that made it hard for outsiders to join the group. Secret molestation, abuse from the swimming team, all went unheard during the term of Father Joseph Petrillo, and Michael Musante.

I never wanted to be involved with anyone from the high school nor wanted to interact with the teachers for various strange reasons I noticed from their behaviors. But what struck my attention, why would a theology priest like Father Frank Rose, wanted to flirt, massage high school boys? After seeing years later on online articles about "Peter Cheplic", if they liked boys and sex, they should have left the parish or the catholic mission...But then something else came to mind...Maybe because they spent so many years pretending to be religiously driven, they made a career and tried to hook up with teenage boys in secrecy... I recall "fr frank rose" did like to caress boys in the back of their knecks and also show off how much cash he had. Some of the dumb jocks would fall for the financially sugar-baby seduction and he bought those boys (aged 17-18) tickets to some event.

It is disgusting and disappointing and if they were so scared and worried of their priest catholic priest careers, they should have just gone to some gay bar and network with people. But no, they wanted fresh virgin inexperienced boys so they can get away with it.

Perhaps deep down (no pun intended) they know the whole religious Jesus Christ gig is just a myth and used it to take advantage of others. Bastards.

At least with online media, this might serve as reference and remain careful. It might not be a real surprise, if these mentioned pastors will get serious and say things like "I swear..." "I would never do such a thing." If there's articles and claims that exist about them, then something went wrong and explains why they were transferred a lot. Also the writer of this complaint actually witnessed these sexual advances. While the author and other collaborators contributed on this compilation, we don't want any money from this. The only thing we want is that these perverts be exposed and realize they cannot live a lie.

Work Experience during his term at: Archdiocese of Newark, New Jersey.

"Peter Cheplic", who also worked at parishes in Hudson and Essex counties and had been promoted to monsignor, abruptly retired from the priesthood in 2006 after Capozzi and two other men came forward and said he abused them in the 1980s when they were children.
Charges:

1) Sexual Advances to boys. An estimated claim of 8 males ranging between the 1970's and 1980's
2) Drugs, Anti depressants, Soliciting alcohol to teenagers under 18.

Monsignor Peter Cheplic, who served at four Hudson County parishes, was assigned to St. Lawrence Roman Catholic Church, Weehawken in 2004, even after archdiocese officials had what was Category:Archdiocese of Newark - Eurêka 7/20/11 4:23 PM http://www.eurekaencyclopedia.com/ index.php/ Category:Archdiocese_of_Newark Page 2 of 4 deemed “credible information” concerning accusations of sexual abuse of young boys by the priest during his ministry. Cheplic, who left St. Lawrence to become a parochial vicar at St. Henry's Church in Bayonne, was removed from his ministry in August 2005, after new allegations about his behavior were revealed by two different men who said they were abused by Cheplic in the 1980s and early 1990s. Cheplic retired “with no faculties” (he can never again work as a priest), March 2006. Cheplic “still maintains his innocence” and “felt that by removing himself from the ministry, he could encourage everyone to begin to heal from this ordeal.”

2. Capozzi allegation Joe Capozzi accused Peter Cheplic of molesting him in the 1980s after Capozzi's family met the priest while Cheplic worked at St. Matthew Parish in Ridgefield, the actual abuse occurred later when he was a teenager and Cheplic worked at St. Joseph of the Palisades in West New York. Settled for $55, 000 in April 2006.

3. Capone allegation Raymond Capone accused Peter Cheplic of molesting him in an East Orange parish in 1985, settled for $25, 000 in April 2006.

"director of schools for the parish of Our Lady of Good Counsel in Newark, NJ, but he was removed four months after taking over for 'inappropriately touching an eighth grade boy.'" 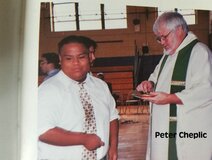 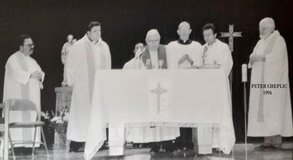 Father Anthony Trapani, Pastor C/o Our Lady Of Perpetual Help Church
Anthony trapani, abusive to children, switched from parish to parish, will not confront issues, will not have meetings, odd relationship with carmela lubrano, coleen caine, and maureen humerick

My xoom energy texas
I'm being charged for other meter reading