He will cause you a lot more drama than he is worth.

He cannot tell the truth and caused that many problems between his Dad, David GARLAND, Step Dad - Scott EMERTON and his Mother – Vikki CHILD formerly Vikki EMERTON then formerly Vikki GARLAND - Because of his compulsive lies he has caused relationship break ups on previous occasions. He could not lie straight in bed.

Maddison (Mook Chook, Moochy, or Moochachos as Mummy prefers to call him), as a young 16 year old Merrimac High School student got sacked for stealing from his first job. Then, I was his Step Dad, and got him a job with our neighbour when we lived at Clear Island Waters. The neighbour was the manager of the BP 201 Ferry Rd Southport and Maddison got a part time job there. Both his Mother and I use to take it in turns to collect him at 9 pm at night. Well he had his high school mates coming in and sold them cut price and free cigarettes and handed them incorrect change. He knew he was on CCTV camera and when the till was out and stock did not balance they rewound the tape. It was shown to me and they unfortunately did not charge Maddison but he got immediate dismissal. He and his mates made restitution as we assured the manager they would.

Then later on when he was in Grade 12 or Senior at Merrimac High he said he found a wallet on the footpath outside the house next door where the bus stopped. I rang the owner Katie EVE’s a young 18 year old girl, as her phone number was in the book, and she was very grateful for Maddison finding it. Her Dad gave Maddison a $20 reward. What we didn’t know was that Maddison had kept some of her ID including her 18+ card and he had downloaded a drivers licence off the internet and was trying to do some identity fraud by photo shopping his photo and changing her details to his. I said to his mother he should ring the girl and tell her and be made to give back the $20 and an apology was in order. His mother would not agree to that and I was told to stay out of it, he was her son and she would meter out the discipline.

His mother had worked for 3 out of the 15 years I supported her and her son and she only got paid maintenance in the very late stages of Maddison’s schooling career.

Anyhow time goes by, Maddison leaves school and I see a boat building apprenticeship offered at Jacobs Well. Maddison applies and the 3 of us get invited to the interview. He lasts 12 months and tells us the boss Len Perry of Eagle Catamarans is closing shop, as things are quiet, and he was made redundant. We had already bought him a car and he had his licence. He wrote the car off and I had it covered under my insurance so he got the payout cheque.

I rang Len Perry and Len said no way was he closing and that Maddison left of his own accord. He did tell me, Maddison had a chip on his shoulders.

It took Maddison ages to find a job, he tried various odd jobs but he had trouble getting paid, so I ended up having a word to his boss and getting the money for him.

We sent him up to Mackay with several thousand dollars, a white card and a mate, hopefully to get an apprenticeship in the mines. This never eventuated and he ended up getting a job with the port authority. Whilst in Mackay he got into trouble with the law. His car was impounded and he got charged with stealing from the Port Authority. His father gave him the money for the solicitor and he eventually got his impounded car back.

So we send him to Perth to obtain work after he does a poly welding course on the Gold Coast. He eventually gets some tickets driving some machinery but his goal is to get out to the mines. Buys a V8 commodore ute, which breaks him financially, keeps ringing home for money from his mother and there are photos of him on face book smoking up the tyres doing plenty of burnouts. Loses his car keys on plenty of occasions and has to pay for new keys and immobilsers. He gets knocked out in the street because of his smart arse comments he gives to people and one of his cars get stolen, his house gets broken into many times. He never accepts responsibility for anything going wrong. His tools get stolen plenty of times.

Spends thousands of dollars on tattoos and V8 Ute, making it illegal on the road Cannot afford the repayments to Capital Finance or the petrol.

Always blames someone else. He telephones his Mother and Step Dad for financial help over the Christmas break when the construction industry closes down, as he has no work and has not budgeted for anything. The mother and step dad also are not working over the Christmas break and are doing it hard. His mother does not care as long as Mook Chook gets everything he wants.

Gets flown home, says he is suicidal. When he talks to either family every second word is “F. Ck”. Has absolutely no respect, for anyone. Goes back to Perth to resume work and gets given opportunity with employer Fulton Hogan to get job in mines provided he has his HR licence. He already has obtained the other licences required like Back hoe Grader & so forth.in West Australia you have to be 23 years old before you obtain HR licence so his grandfather Max CHILD to give him $5,000 and he flies home to Qld as you can get that licence in Queensland at 21 years of age. He books in for the only test available after transferring his licence back to QLD. Gets HR licence then goes home and eventually scores job at Port Headland in North West Australia working for Fulton Hogan, building roads into mine site.

He is seen on Facebook saying that he has finally made it, and giving the forks to those folk that said he would never make it.

Tells his mother his Vodaphone won’t work out at the camp site and has to buy a Telstra prepaid, new telephone number. Does not tell her his phone has been disconnected because he cannot pay the $4,000 bill and they are about to lodge a default against him on his credit file.

In his first week he upsets all of the people at the camp, telling them they are not doing it correctly. Has to eat in the mess on his own, they won’t sit with him. They drive past him and leave him at the camp site instead of collecting him and taking the crew the 8 klms out of town to where they are working. Makes $6,600 gross in 2 weeks, but spits the dummy and quits. Goes back to Perth and eventually finds a 60k a year job.

He then deletes any reference to Fulton Hogan on his resume, as they won’t give him a good reference and replaces the time with Fulton Hogan saying that he has worked for one of his mate’s companies.

Stay well away. Bad news. Will do a runner on you and cause a heap of trouble in the whole organization.. 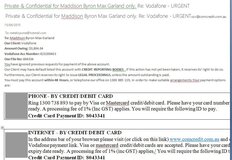 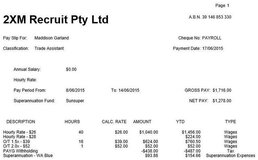 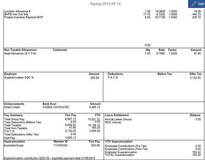